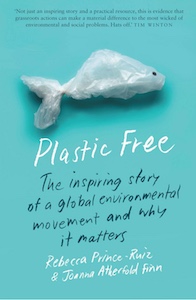 Plastic Free is a warmly personal narrative by the founder of Plastic Free July, a sustainability initiative which began less than ten years ago, almost by accident, in Perth.

Prince-Ruiz was working at the time as a community educator in waste management so she was well equipped to support the programme when it unexpectedly took off – and that was all it needed.

Her emphasis was always on community, on shared learning, and on doing what’s possible right now rather than aiming higher and missing the goal. It made Plastic Free July an achievable and therefore engaging challenge, which then became a gateway to engagement with other sustainability issues – avoiding other single-use products, reducing food waste, joining food co-ops, and so on.

‘I’m going plastic free next month, who wants to join me?‘

When Rebecca Prince-Ruiz asked her colleagues this question in 2011, she had no idea that less than a decade later it would inspire a global movement of 250 million people in 177 countries to reduce their plastic use. Plastic Free tells the incredible story of how a simple community initiative grew into one of the world’s most successful environmental movements. It also shares tips from people around the world who have taken on the Plastic Free July challenge and significantly reduced their waste.

Plastic Free is a book about positive change and reminds us that small actions can make a huge impact, one step – and piece of plastic – at a time.

That’s straight from the back cover and (perhaps surprisingly, given its source) doesn’t make any claims which Plastic Free doesn’t amply back up.

I intended to prove that point by quoting from the book but discovered that I wanted to share so many gems that I will simply say, “Highly recommended!” and leave it at that.

2 thoughts on “The story of Plastic Free July”

When this happens, it's usually because the owner only shared it with a small group of people or changed who can see it, or it's been deleted.
View on Facebook
· Share